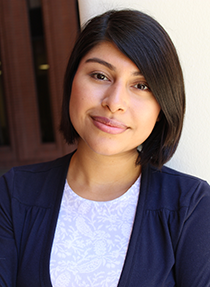 To mark National Voter Registration Day (Sept. 20), Kristy Plaza (right), Communications and Media Manager at the Dornsife Center for Political Future, explains – for them – the importance of voting.

Kristy Plaza (they/them) learned at an early age “your vote is your voice.” The daughter of immigrants and a first-generation college student, Kristy’s parents encouraged the family to participate in political conversations so they could shape an opinion and then translate it into action.

“When I discovered voting, I was a sixth grader and heavily involved with the Bush versus Gore election. I had many opinions and I was concerned how the election would change my family’s life and the lives of those in our community of Duarte, California.” That feeling of not having a voice inspired Kristy to ensure the voice of her parents would be heard. In fact, the first “campaign” was to get Kristy’s parents to the voting booth. In every election since, the family discusses in-depth the candidates and ballot measures, and ultimately goes to the polls together to vote as a family.

Voting is a civic duty

After getting Kristy’s parents to vote, the next task was to inspire others to get out and do the same, recognizing that one of the biggest obstacles to voting is an overall sense of apathy. “Most people I talk to don’t want to vote because they believe their vote doesn’t matter. So much of this solidifies my own belief that voting is not only a privilege but a right and a civic duty.” Kristy believes the importance of voting is to make sure every citizen exercises their political voice so elected leaders reflect the needs and wants of the community.

When communities experience difficulties like poverty, homelessness, or when civil rights are taken away, Kristy feels there’s a deep, fundamental need to vote. “Voting is what allows people to speak up for and advocate for themselves. By voting as a community, the collective voice speaks loudly to elected officials about their needs and wants. The voices of those who vote can’t and won’t be stifled.”

So, what’s Kristy’s response to someone who might believe that their vote doesn’t matter? “I would ask you what you care about. What is important to you? What do you care about that you don’t think is being reflected?”

Importance of your vote

Kristy goes on to say that while voting isn’t a hard, physical task, it is a revolutionary task. Even if your elected official or ballot measure doesn’t win, you’re still a part of the fight. “For me, I do not want to ever not fight for myself. That’s how I live my life. I want to fight for what I believe is right.”

Do you have a voter story to share? Perhaps about when you first came of voting age? Or when you first became a U.S. citizen? Please send your inspirational voting stories to gateway@usc.edu so we can share the best ones with the USC community.

Kristy Plaza began their journey at USC in 2012, receiving a double major undergraduate degree in broadcast journalism and political science. On graduation, they worked as a Program Assistant at the Dornsife Unruh Institute of Politics and are now Communications and Media Manager at the Dornsife Center for Political Future. They earned a graduate degree in public relations from USC Annenberg in 2020.

Click here to cancel reply.
Access VoteSC to register to vote, receive election reminders, and keep up with the key dates leading up to Election Day, Nov. 8, 2022.